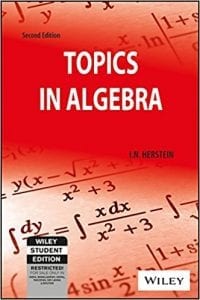 TIFR 2014 Problem 25 Solution is a part of TIFR entrance preparation series. The Tata Institute of Fundamental Research is India's premier institution for advanced research in Mathematics. The Institute runs a graduate programme leading to the award of Ph.D., Integrated M.Sc.-Ph.D. as well as M.Sc. degree in certain subjects.
The image is a front cover of a book named Topics in Algebra by I.N.Herstein. This book is very useful for the preparation of TIFR Entrance.

Which of the following groups are isomorphic?

Both these spaces are vector spaces ove (\mathbb{Q}).

We state a result without proof.

Theorem: Let (V) be an infinite dimensional vector space over a countable field (F). Then the dimension of (V) over (F) is (|V|) (the cardinality of (V) ).