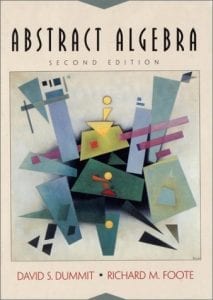 TIFR 2014 Problem 20 Solution is a part of TIFR entrance preparation series. The Tata Institute of Fundamental Research is India's premier institution for advanced research in Mathematics. The Institute runs a graduate programme leading to the award of Ph.D., Integrated M.Sc.-Ph.D. as well as M.Sc. degree in certain subjects.
The image is a front cover of a book named Abstract Algebra by David S. Dummit and Richard M. Foote. This book is very useful for the preparation of TIFR Entrance.

Let (G) be the set consisting of all the rotations of (\mathbb{R}^3) which take (C) to itself. This set forms a group under the binary operation composition. In fact, (G) is a subgroup of the group of isometries of (\mathbb{R}^3). The identity is the identity transformation (rotation by 0 degree).

We recall the Orbit-Stabilizer theorem: