What is spiral similarity?

Spiral similarity, for our purpose, will be a beautiful motion in the plane. It is a combination of rotation and dilation (expansion or contraction by a constant factor.

Suppose AB is a (finite) segment in the plane. CD be another segment. Assume AB and CD to be disjoint.

It is possible to send AB onto CD using a combination of rotation and dilation. 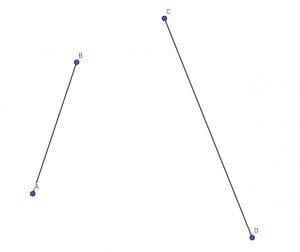 To accomplish this, we need to find:

How to find center of rotation (and dilation)

O could be same as X or could be a different point.

Claim: O is the center of rotation and dilation, that sends AB to CD. 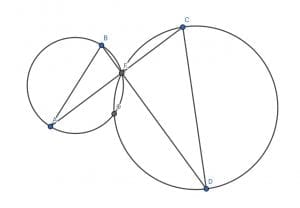 Pause and think: Can you find some cyclic quadrilaterals in this picture. 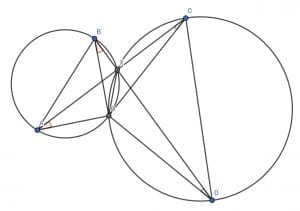 Pause and think: Can you find a pair of similar triangles?

This is because we have shown pair of corresponding angles to be equal. Hence the two triangles are equiangular.

This implies \( \angle AOC = \angle BOD \). We may imagine this as following:

Since the angles (of rotation) \( \angle AOC, \angle BOD \) are equal, hence this works out nicely.

Moreover, OA grows into OC and OB grows into OD by same constant factor. This is true because \( \frac {OA}{OC} = \frac{OB}{OD} \). This follows from the similarity of triangles.

Hence A goes to C and B goes to D, via rotation and dilation, centered at O.

Complex numbers are algebraic tools to encode this motion in the plane.

(This is a supplemental note to live lecture session of Complex Number module of Cheenta I.S.I., C.M.I. Entrance Program and Math Olympiad Program)