Proper Metric Spaces can be modeled by Rays!

‘Proper’ is a heavily overloaded term, both in life and in mathematics. It may mean different stuff in different contexts. Thankfully mathematics is far less complicated that life and we can rigorously define properness.

Proper Function: A continuous function ( f : X  \to Y ) between topological spaces is proper if the preimage of each compact subset of Y is compact.

There is a fancy description of Proper Spaces using Proper Functions.

We will rigorously prove this theorem. But first, lets draw some pictures. 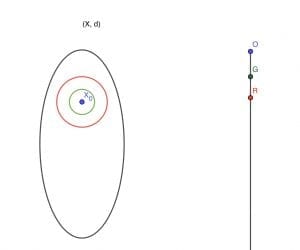 (It is useful to try and write your own proofs first)

We will show that every infinite sequence has a convergent subsequence (sequential definition of compactness).

Finally using arguments similar to the last part of the previous proof, we are done.

Theorem: Show that a continuous function ( f : X \to Y ) between proper metric spaces is proper iff the obvious extension ( f : X^* \to Y^* )  between one-point compactification spaces is continuous.