This is an interesting problem from ISI MSTAT PSB 2011 Problem 4 that tests the student’s knowledge of how he visualizes the normal distribution in higher dimensions.

Let me elaborate why this makes sense!

So, if we can show that this event has positive probability for any given $x_0, \epsilon$ pair, we will be done, since then in the limit, we will be exponentiating a number strictly less than 1 by a quantity that is growing larger and larger.

As, \( \delta \) is a lower bound of a probability , hence it a fraction strictly below 1.

Hence we are done.

There is a fantastic amount of statistical literature on the equi-density contours of a multivariate Gaussian distribution .

Try to visualize them for non singular and a singular Gaussian distribution separately. They are covered extensively in the books of Kotz and Anderson. Do give it a read!

Anderson has several books and two of them are multivariate and elliptical countours. Would you like to say which one do you mention?

I mean the book An Introduction To Multivariate Statistics 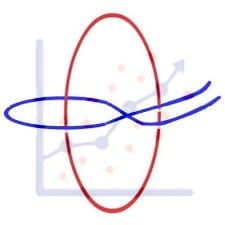