Leonhard Euler was one of the greatest mathematician who ever lived. He lost his eyesight in the last few years of his life. That did not deter the Swiss genious to produce extraordinary mathematics. Consider the following geometric object. We name it G. 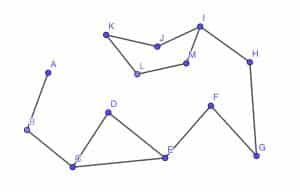 It consists of vertices, edges and faces (or regions). Suppose V = Number of Vertices, E = Number of Edges and F = Number of faces. The extraordinary fact is, the number V – E + F turns out to be a constant! For example, in the above figure V = 13, E = 14, F = 2. Then V – E + F = 1. At this point you should create your own pictures and experiment with it. What value do you get for V – E + F in your figures? This number, V – E + F, is known as the Euler Number. We are interested to extend this idea to 3-dimensional objects. We will experiment with five solids: Cube, Tetrahedron, Octahedron, Icosahedron and Dodecahedron. The goal is to find out Euler number for each such solid. Finally we will be interested to generalize the idea as well. 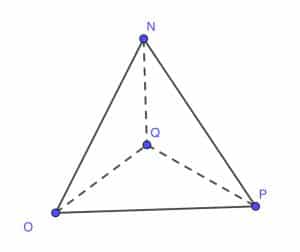 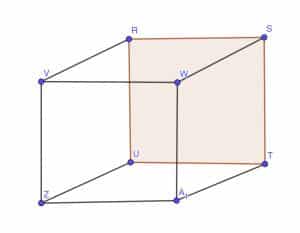 Then the vertices and edges will cast shadows on the ‘floor’. Since the light source is a point, and far away, shadows of no two vertices or no two edges will overlap. Hence looking at the shadow, we can make a fair idea about what is happening in the 3 dimensional world. Notice that each face of the solid is an enclosed region in the projected image except the top lid. That is the face immediately below the light source does not have a corressponding enclosed region in the projected image. You may imagine that the infinite region outside the projected image is the region corressponding to that face. This strategy successfully converts the three dimensional problem into a two dimensional one: find the Euler number of a two dimensioal closed object with vertices, regions and edges and add one to that (for the infinite region corressponding to the top lid in the solid). Hence the real question balls down to whether we can pin down the Euler Number of two dimensional objects. Triangulation and De-Triangulation We will describe a sketch of a strategy to investigate the Euler Number of two dimensional connected graphs (a technical term for the object that we were considered; different from a ‘graph’ of coordinate geometry). 1. Pick an enclosed region in the object. If it is triangle then do nothing. If it is a quadrilateral or pentagon or some other polygon, then join two vertices such that the region is split into another polygon and a triangle. 2. This step increases the number of faces (regions) by 1 and the number of edges by 1. But that does not change V – E + F ( V – (E+1) + (F+1) ). 3. Keep on doing this until all regions are triangulated (that is each polygonal region is converted into triangular regions). 4. At every step the quantity V – E + F remained unchanged as observed in Step 2. 5. Finally start detriangulating: If an edge is not a part of a triangular region, and is terminal (attached to a single vertex), then delete that vertex and that edge. If an edge is part of a triangle, just delete the edge. 6. Again notice that the process keeps the quantity V – E + F constant. Finally the process of de-triangulation leaves us with a triangle. or two verticess and an edge. Each of these two objects have Euler Number 1. Since during the entire process the Euler Number was unaffected. Then Euler Number of the initial object must be 1.