A soldier carrying a gun with parachute A soldier with a machine gun, falling from an airplane gets detached from his parachute. He is able to resist the downward acceleration if he shoots 40 bullets a second at the speed of 500m/s. If the weight of a bullet is 49gm, what is the weight of the man with the gun? Ignore resistance due to air and assume the acceleration due to gravity g=9.8m/s2 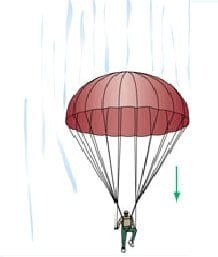 the weight of the man with the gun=100Kg.