Let's discuss a beautiful problem useful for Physics Olympiad based on the Conical Pendulum.

An inventor designs a pendulum clock using a bob with mass m at the end of a thin wire of length L. Instead of swinging back and forth, the bob is to move in a horizontal circle with constant speed v, with the wire making a fixed angle \(\beta\) with the vertical direction. This is called a conical pendulum because the suspending wire traces out a cone. Find the tension F in the wire and the period T( the time for one revolution of the bob).
Solution: 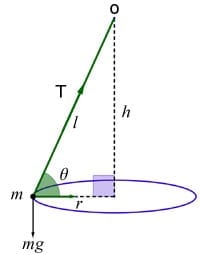 SET UP: To find the tension F and period R, we need two equations. These will be the horizontal and vertical components of Newton's second law applied to the bob. We'll find the radial acceleration of the bob using one of the circular motion equations.
The figure shows the free-body diagram and coordinate system for the bob at a particular instant. There are just two forces on the bob: the weight mg and the tension F in the wire. Note that the entre of the circular path is in the same horizontal plane as the bob, not at the top end of the wire. The horizontal component of tension is the force that produces the radial acceleration \(a_rad\).
Execution: The bob has zero vertical acceleration.