Cheenta and Singapore Method – creating Mathematicians of the future

Recently, French mathematician Cedric Villani’s team came up with ’21 measures for the teaching of Mathematics’. I read through the report, with great curiosity and happily noted that Cheenta’s Thousand Flowers program has already implemented some of their recommendations.

‘Thousand Flowers’  is a unique interdisciplinary program at Cheenta for students of class 3 to 8. It is designed as a ‘pre-olympiad’ program. Usually, young kids who desire to participate in Mathematics (or science) olympiads in future, participate in this course.

The ‘Thousand Flowers’ program is strongly grounded on three principles:

We considered the Mobius Band in one of our sessions. First, pick a piece of paper and cut out a horizontal strip. Next, twist the strip once and glue the two ends.

Mobius band has many ‘visually’ appealing features. For examples, students can easily experiment and check that it has only one face! Moreover, we may cut the Mobius band along the midline, or along lines which are closer to the ends and try to guess the result. Finally, the students were asked to create doubly twisted, triply twisted bands, and guess what would happen if they were cut in certain ways.

Draw two points, A, B, on a piece of paper. Suppose A and B are 5 centimeters apart. Take a thread, 8 cm long. Glue two ends of the thread to A and B. Now take a pencil to stretch the thread as much as you can. Then move the pencil to mark the path of motion on the paper. 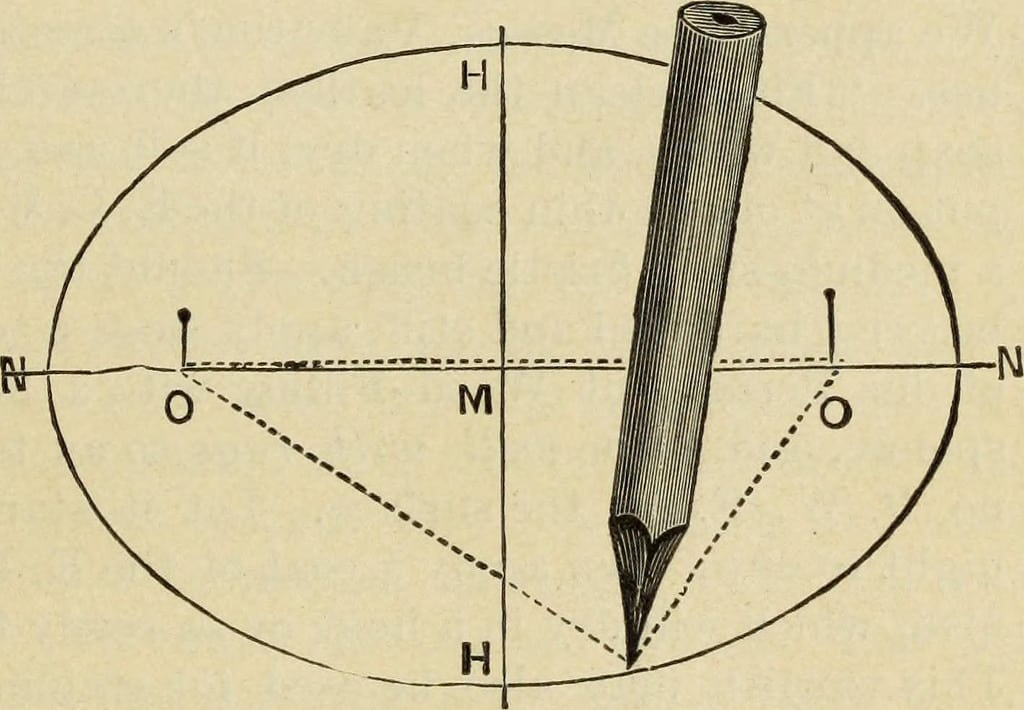 The result is an ellipse and the device that we constructed is an ellipse compass. The discussion naturally extends to the idea of ‘locus’. In a Thousand Flowers session, students constructed the ellipse compass. Then they were encouraged to ‘imagine’ path traced out by moving points with a pre-defined rule of motion. They could easily understand (guess) the cycloid, astroid and circle. These are only two examples of several ‘hands-on’ activities that were implemented in the Thousand Flowers program. The process delivers an immediate sense of ‘accomplishment’ to the kid. They also have some ‘end product’ to hold on to. The method is also useful to excite imagination in student’s mind. Moreover, it prompts them to experiment, fail, and experiment again. True research caliber work requires this ‘attitude’ toward fundamental science.

We introduced ‘vectors’ as tools of translation (geometric motion). This naturally leads to the investigation of ‘magnitude’ and ‘direction’ of motion. This, in turn, motivated us to introduce two numbers that would encapsulate this data (direction and magnitude). Hence ‘polar’ coordinate system precedes ‘cartesian’ coordinate system in this approach. A natural application of this tool for quantifying translation is to describe kinematics (from rudimentary mechanics). The notion of relative velocity and a related problem is served in a follow-up session

Sieve of Eratosthenes and Prime Algorithm

Prime numbers are divisible by 1 and itself. They are the building blocks of all numbers. Once a student is familiar with a sufficiently large number of examples of prime numbers, we may start to count them. Sieve of Eratosthenes gives us a ‘method’ to do exactly that. Some examples show that it is time-consuming to implement the Sieve ‘by hand’. How can we ask a machine to do this counting? Suppose we want the computer to count the number of primes from 1 to 10000. What step by step instruction, should we give the computer to do just that? This problem is interesting because there is no prime number formula, as of today (we have Gauss approximations, but no exact formula). Students gain rudimentary intuition about arrays, loops, and pseudocode in the process of writing the step by step instructions for the computer. The major portion of Thousand Flowers program is devoted to mathematics. However, it is very important to have an interdisciplinary approach in the discourse. After all, the bulk of mathematics was created to solve the real-world problems of architecture, measurement, engineering, and life sciences. Sulba Sutra found ‘Pythagoras’ theorem (about 700 years before Pythagoras) to solve a problem of architecture (how to build Vedic alters). Archimedes found the method of infinite approximation for a similar reason. Gauss discovered differential geometry while carrying out a geographical survey. Protein modeling has rejuvenated the development of algorithms and graph theory.

Consider the following problems: Both of these problems demand ingenuity. They do not need any arcane formula or theorem. All the Thousand Flower discussion are necessarily problem driven. More importantly, most of these problems are of elementary nature (that is they can be solved without any big formula or theorem). The faculty presents a central theme of discussion with the help of a problem. Students then deliberate on the idea and proceed to solve it with the help of occasional hints from the faculty. This ‘method of pedagogy’ is sometimes punctuated by some theoretical remark. However, these pauses are kept at a bare minimum. Our experience with the Thousand Flowers program is very interesting. Students, even slow starters, have exhibited almost 90% class turn-outs on a regular basis. Only 3 out of about 20 students retracted from the process in the last 1.5 years. The average age of the participants is 10 years though younger students do participate on a regular basis. After one year of the program, most of these kids show remarkable improvement in problem-solving ability. They also exhibit an enhanced interest in the subject. We will continue to tweak this program. It is of a certain pedagogical interest as well. If we want to create mathematicians (and researchers) of future, we need to develop a curriculum and method of teaching that facilitates creativity and imagination. In India, we have an even greater challenge. Our colonial past has presented us with an education system that is great at producing ‘clerks’ and extremely bad at creating innovators. Hence, in the Indian arena, programs like ‘Thousand Flowers’ are all the more important.

An excerpt from the Report

Get Started with Pre-Olympiad Thousand Flowers