In mathematics, if the quotient space X/G is a compact space, then it is called cocompact action of a group G on a topological space X. If X is locally compact, then an equivalent condition is that there is a compact subset K of X such that the image of K under the action of G covers X.

Suppose a group is acting properly and cocompactly on a metric space X, by isometries.

Since the action is cocompact, there is a compact set K whose translates cover X. 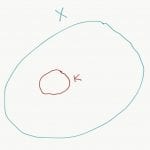 For each , choose small (enough) balls .

How small do we want the balls?

Small enough, such that all but finitely many of the translates of the ball is disjoint from the ball. 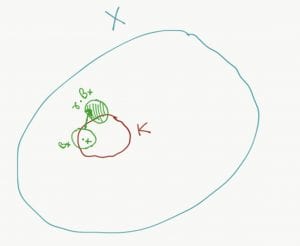 How do we know that there is such a ball? This is by definition of proper action. Since the action is proper, by definition, we will get such balls for each x in X.

Intuitively a proper action is proper, that is, most of them (the isometries) move balls considerably.

is an open cover of K. Hence it has a finite subcover (as K is compact).

Choose finitely many balls , such that they cover K.

These finitely many balls have two properties:

Thus each member of has this property : hit all of the balls in the previously found cover by it. At least one of them will not move a lot (that is the translate will have a non-empty intersection with the ball)

Suppose be any point. There is a such that .

Then . This is the element of K that goes to x under 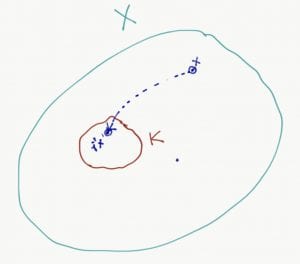 Now consider the isotropy subgroup , that is group of all isometries that fixes x.

Notice that is the isotropy subgroup of . Why? Suppose . We will show that .

We can similarly show the converse.

But this is the subgroup that does not move the ball in the cover containing in a disjoint manner. Hence it must be inside , and hence finite as was finite.